Turkey ferrying thousands of notorious terrorists to the war zone & Russia delivering lethal fighter jets and missiles to the Libyan National Army (LNA), a disastrous mix!
Washington, June 9th, 2020:  Nine years after the fall of the Qaddafi regime, the Libyan people have not been able to establish viable democratic institutions. How is it possible, Libya sitting on the eighth largest oil reserves in the world has become a failed state, fertile ground for Islamic extremists, failed experiments by political islamists, and a pawn in the hands of Turkey, Russia, and regional players.  ​
​
The ceasefire announced by UNSMIL on June 1st under an agreement reached between the United States and Russia will require concrete steps in order for it to hold. Recommendations of the Berlin Conference of 1-19-20, and UN resolution 2510 adopted February 12th, 2020 will have to be implemented. The Cairo conference on 6/3/20 between Egyptian President Abdulfattah Al-Sissi, General Khalifa Haftar, Commander of Libyan National Army (LNA), and Counsel Aguila Saleh Issa head of the House of Representatives (HoR) provides a roadmap for ceasefire and a political process. ​ it is widely accepted by many nations including the U.S, France, and the Arab League.
​
The United States and UNSMIL, and its Acting Special Representative, Stephanie Williams must avoid creating a new Government of National Accord (GNA) and must dismiss the notion that there are not effective political figures to deal with in eastern Libya. The mistakes that brought us here today must not be repeated.  Dealing more extensively and more favorably with the current GNA, and marginalizing political voices in eastern Libya will create dissatisfaction and a failed political process. The political track has become more popular than the military one in eastern Libya. Counsel Aguila Saleh head of HoR in Tobruk is becoming more of a hero than Haftar.  ​
​
There are many great minds very capable Libyan technocrats and political figures in eastern Libya. 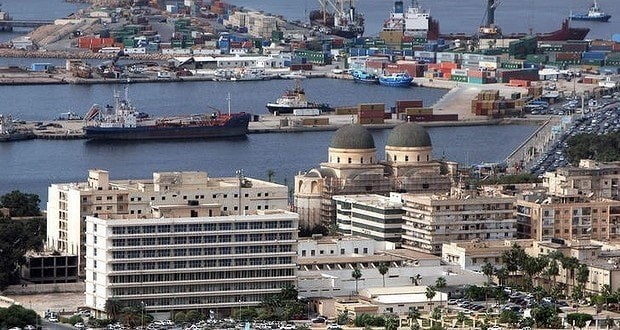 Photo - City of Benghazi, Libya
The U.S foreign policy with respect to Libya has been vague for many months. The Libyan people who wished for a positive intervention by the U.S have become confused and disillusioned.  Ambassador Richard Norland held a press conference on June 4th. U.S motto “Libya for the Libyans”, “all mercenaries and foreign intervention must depart in 90 days” Ambassador Norland stated. ​
​
Norland’s interview with CNN's Executive Editor, Tim Lister on June 3rd, 2020 released today provides good insights on how a U.S diplomat perceives Libya.  The U.S must be consistent in its call for all foreign intervention to leave Libya. It is not clear U.S motto applies to Turkey a fellow NATO member, facts on Al-Watia air base tell a different plan. Turkey is quickly reconstructing the base. ​
​
A brazen military intervention by the Russians when 14 MiG29s and Su-24 combat aircraft arrived in eastern Libya about two weeks ago, a move the U.S was warned about by eastern Libyan government officials several times and weeks in advance is part of on going “secrete” negotiations between eastern Libyan government, LNA and the Russians.  The Russians want an airbase, and desire a submarine station in the city of Sousa, 50 miles west of Derna. An obvious response for potential long Turkish presence. ​
​
​The U.S must be firm that emboldened Government of National Accord (GNA) with its Turkish ally do not marsh eastward or continue to commit genocide. Such event will further destabilize Libya, draw more support from Egypt, UAE, Saudi Arabia, and Russia. The sum of such actions will cause the break up and split of Libya.
​
The Libyan peoples’ back is against a wall. While the Muslim Brotherhood controlled Government of National Accord, has depleted Libya’s sovereign wealth to the tune of $28B in deposits in Turkish banks, and investments in Turkey in order to remain in power, Libyans in eastern Libya, and Haftar are compelled to strike a military alliance with Russia.
​
The United States national security interests can only be achieved through; peace on the ground in all of Libya free from notorious terrorists and militias, intimate understanding of corrupt, corrosive islamic extremists regime experimenting with political islam, the make up of the Libyan political players, and support for the construction of democracy in Libya by U.S and western European NGO’s. Understanding those precise aspects of the political make up of Libya will without any doubt help the U.S government and the Europeans streamline and refine their foreign policy on Libya and the region. ​
​
The United States must pursue a foreign policy that is truly based on enlightened self-interests, must take the lead and work with the United Nations Security Council to support the ceasefire and advance UNR2510 political process.   Continued assistance from the United States to shepherd the current ceasefire and political processes is critical and vital.!
Twitter: https://twitter.com/omarturbi/
A Omar Turbi, Expert, U.S Libya Relations. Testifies before Congress on U.S Libya Foreign Policy. Considered by many as the foremost authority on Libya and its relations with USA. Omar Turbi, grew up in Benghazi, Libya  Twitter
'What is Trump's Game Plan for Libya?' asks Omar Turbi, Expert, U.S-Libya Relations
​By: A Omar Turbi, Expert, U.S Libya Western Relations - Jan 15th, 2020
Home
Bio
Rebuild Libya Foreign Ministry & Diplomatic Missions
Media
Testimonies to U.S Congress
Human Rights
Contact
© 2021 OmarTurbi.org